As teased and announced, Apple’s latest iPhone 5 is finally launched in Malaysia yesterday on 14 Dec 2012 (Friday). Check out my last post on Heads Up:TECH about it here for more info and links to all the local telco plans.

I was invited to Maxis’ iPhone 5 launch in Malaysia and attended the Press Conference the night before the launch, on 13 Dec 2012 (Thursday), which goes on until the consumer launch countdown until midnight at PIKOM ICT Mall in Cap Square, Kuala Lumpur.

It seems like every major media outlet and tech bloggers were there. The place was packed with TV crew, too.

Maxis being the first local telco to bring the iPhone to Malaysia 3 years ago, is fully embracing this Apple product that they incorporated Apple’s Passbook in the event.

The cheapest iPhone 5 plan from Maxis starts at just RM50 monthly (iValue Simple) onwards, with 0% interest instalment payment. Other existing plans, such as iValue 1 from RM100 monthly, now gives you more talktime, SMS, MMS, data quota and allows purchase of the iPhone 5 at a cheaper price than the iPhone 4S before.

The new rate plans are flexible for existing customers to upgrade or make any contract extensions, too.

For more info on other Maxis’s VAS and apps, check out their product page HERE.

Right after Q&A which consisted of a lot of talk about LTE (and immediately dismissed and skilfully avoided), announcement came that we get a Media discount and Maxis is giving away 5 iPhone 5 in a lucky draw. 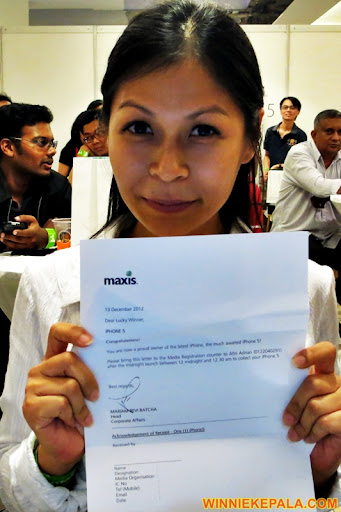 Yes, our beloved Rebecca Saw, who was gonna buy one anyway, won herself an iPhone 5!!!

The Consumer Launch and Purchase

After the media event, I roamed around the location at Cap Square and noted that the queue outside at the Consumer launch area is building up. 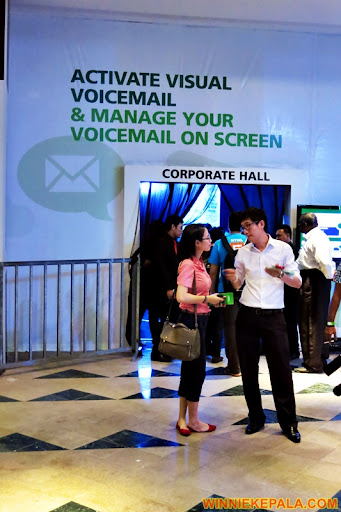 There’s a giant countdown clock counting down to midnight, 14 Dec 2012, when the iPhone 5 would be available for purchase to all the pre-order customers queueing up. 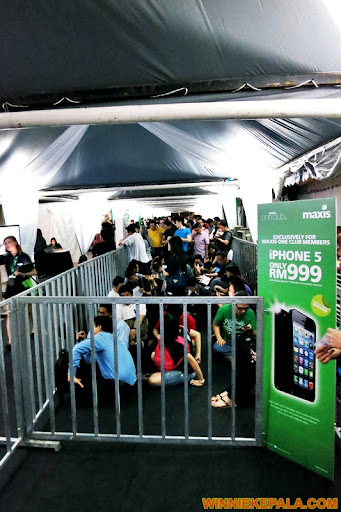 Here’s the start of the queue, where the first couple in line supposedly started waiting since 10.00 am!!!

PS. If you don’t already know, Maxis is also offering their loyal customers from the Maxis One Club membership the option to purchase the iPhone 5 for RM 999 along with any iValue 2 (RM155 monthly) upwards.

Funnily, a lot of the people in queue were either playing with their existing iPhones or playing games or watching videos on their iPads.

If you followed me on Twitter @WinnieKepala, I was tweeting…

It seems later in the wee hours of early morning, the queue only got longer to wrap around the Cap Square building. Oh my, how some of you are willing to forgo your Thursday night / Friday morning just for a phone.

Maxis came prepared with 65 counters to process payments, collect your device, unbrick your device (??), purchase your smartphone insurance and even a charging station available.

With all these preparation though, doesn’t ensure a successful launch and happy customers.

It seems, sometime around 3am ish, Maxis staff had to announce to those still in queue that they have ran out of stock on the 32GB and 64GB devices. This is truly unfortunate and downright frustrating for the (sleepy) customers in line. These are pre-order customers standing in line there. How can Maxis sell out all the device but approve these pre-orders?

Rumour has it that even with pre-order customers, some ended up purchasing multiple device, eventhough they only pre-ordered one device. Tsk. Tsk. Tsk, Maxis.

The low stock count for the 32GB and 64GB iPhone 5 was subsequently confirmed by @MaxisComms tweet.

iPhone5 News: Sorry.We’ve run out of stock for 32/64GB.16GB remains available. Please leave your name/no at our centres so we can revert .TQ

Celcom and DiGi were also organising their iPhone 5 launches respectively (I hear it’s a much smaller affair though) that night.

Additionally, from 14 Dec 2012 (Friday) onwards, you can already order the iPhone 5 from Apple Malaysia store.

Were you one of those who queued at Cap Square for the midnight launch for Maxis iPhone 5? Did you get it in a different Maxis outlet (like TTDI) without any problems? Did you get a Celcom or DiGi iPhone 5 instead? Did you purchase it without a plan instead, from Apple, SenQ, other retail outlets?

Just as I was leaving, I caught a glimpse of the giant countdown clock…

One thought on “Maxis iPhone 5 Launch in Malaysia”