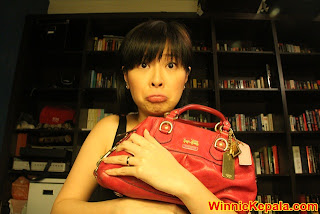 Those on Facebook and Twitter has probably already heard the news. Yes, I survived a snatch theft!

I live in the city centre, literally walking distance to KLCC shopping mall. Still, I don’t walk through the park to get there, I’d rather drive. that 2 minutes distance.

However, today as I was planning to head over to KLCC, I noticed the bad traffic outside. Instead of being stuck for the next 30 minutes in the traffic jam (it was after work rush hour traffic), I decided to take a nice walk to the mall.

My husband does his running in the park regularly and is constantly nagging that I’m spoilt and I should enjoy a nice walk through the park sometimes.

Merely 20 feet out of my apartment gate, two guys in a bike came onto the pathway and headed towards me. I was just looking up from my phone and saw them approaching in a millisecond. The guy at the back reached out and grabbed my handbag – which was slung on my arms.

I didn’t stretch my arms and release the bag, I still had my arms bent and hung on to it. They didn’t manage to grab my bag. But they did manage to pull me on the ground and I was dragged a little. Just a little. The bikers didn’t stay nor did they attempt to fight me for the bag, they just zoomed right off.

The Troika security guards and managers (apartment next door) came rushing towards me. Soon a small crowd gathered. Everyone asked if I was all right, what happened, which way they came from, if I saw their number plates or faces. Nope. Nothing. I was just a little shaken.

I got off the floor and examined myself. A little cuts and bruises here and there. I walked my ass back home and immediately washed off the cuts.

Damn! I just became a victim of snatch theft – which happens (unfortunately) quite regularly here in KL. I had great caring words from friends and family online. Thank you all for your kind words and future advice to be careful. I am OK – just a little shaken and shocked.

With this incident, the topic started to digress…

What we want to happen to the snatch thieves

Why this happens so much in Malaysia?

The last comment referred to the recent news that a similar couple of biker snatch thieves got chased in a car by their victim. She ran into them with her car and they were both flung from their vehicle. One of them severed his penis and died. Read the story here on TheStar.

To many people, including myself, this is the right karma and punishment for these snatch thieves. I say good for the woman victim (I would’ve done the same) and good for the thieves, too. BASTARDS!!!

I hope that the 2 idiot biker snatch thieves get in an accident shortly after attacking me and die!!!